A couple of days ago, I received a call from a friend stating that at a certain location in Amakusa,
there are numerous “Nabura” (fish feeding on the surface).
I immediately jump on my friends boat and test the new Sharapoa Jr.
I was half skeptical about the info but thought that it would be ok as I could check the balance of the new lure. 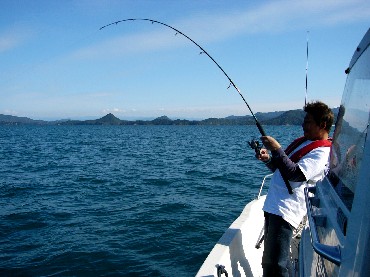 However, while preparing my tackle after arriving at the location, the “Nabura” started close by.Luckily,
the Nabura moved towards the boat and with my first cast with the new prototype Sharapoa Jr. landed a Yellow-Tail. 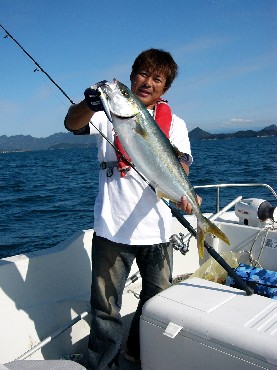 The fish caught on the first cast was 70cm over. 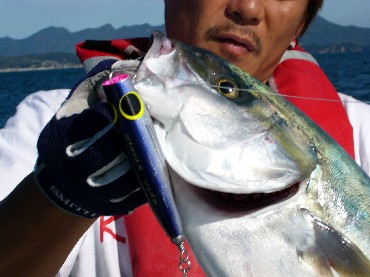 Sharapoa Jr. is like this.
As you can see, it is a smaller version of Sharapoa, hence, Sharapoa Jr.
Flying fish color with Decoy 1/0 hooks. 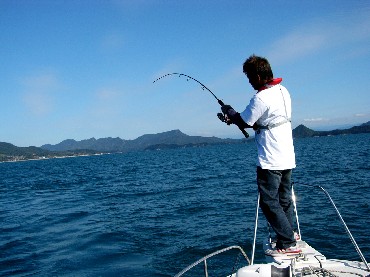 While taking the photo, another Nabura started around us, so I quickly unhook the fish and cast.
Another one hooked up immediately. 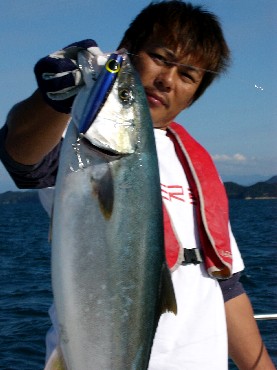 Same size as before. The school seems to be pretty large so it must have been from the same school.


My friend by this time had become the “Captian, Photographer,
Deck-hand (landing the fish)” and was furious as he could not fish, so we changed roles. 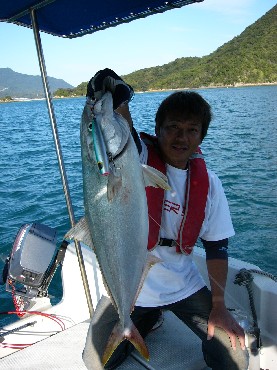 Another bite on my lure!!
When I asked for another picture, he promised that “this would be the last one”.
Gizzard Shad color, Decoy SW 3/0 hooks.

To his word, he really didn’t take any pictures for me, so here it is.
There were numerous marks on the body of the fish. It must have escaped from one of the fish farms.
Sharapoa Jr. Sardine color, Decoy SW 1/0 hooks.

The results from 5 hours of fishing was 5 Yellow-tails caught on the Sharapoa Jr. The Largest being 81cm.
After the Nabura had settled, by jigging I added another 3. Totaling 8 Yellow-tails. 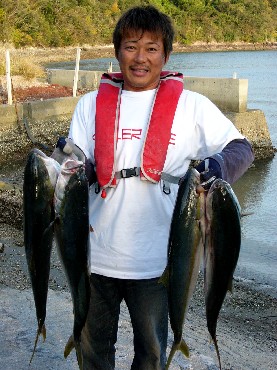 After returning to the marina, I tried lifting all the fish, but 4 was my limit.
My friend soon calmed him self, after I gave all the fish to him!
Thankfully he invited me back.
For reference he was mad as he hooked up 3 and landed non.

The test lure for this trip.
Sharapoa Jr. (prototype)