I went to Tokara islands again this year.
Although I could not take much time off this year,
I still wanted to finalize the HATO-SP, so I went even with the little time I have.

Similar to last year, I went alone and I was the only person on the island fishing.
Appart from the last day, it was rainy, cloudy, and lightning flashed on and off, so it was very scary.

After a while, the rain had receded, and there was a sign of presence, but the fish were reluctant to bite.
No luck even by changing color.
I was not 100% sure, but as a felt the need, I decided to bring in the test lure “Panic Swimmy”.

The first cast after changing the lure, as expected, I got the results.
The casting I had been doing all night, felt surreal.
It seemed like an ok size so I call up the husband of the motel for support in landing the fish. 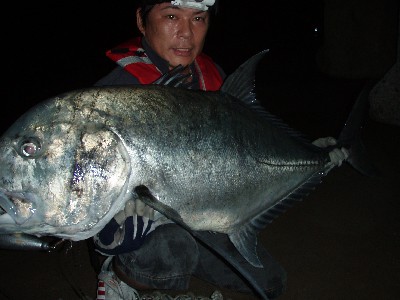 It fought pretty hard, but it wasn’t what I was expecting. Actual length, 133cm.
Its a great feeling when landing a fish as I had aimed for.
Caught on the test lure, “Panic Swimmy” improved version.

After this, there was no feeling of presence. I stayed till early in the morning but this was the end of the first day.

On the second day, the fish are boiling on the surface in the pier. The islanders are catching the flying fish.
I had been using the low-light colors which has proved its potential on numerous occasions,
but the fish are very reluctant tonight. The black type lures are the go when its like this. 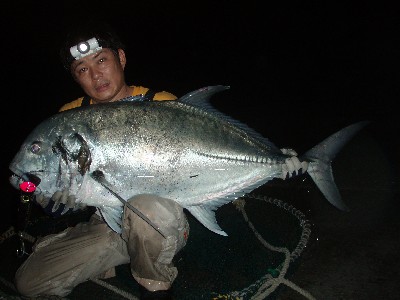 The first cast after changing to the black. Although small, I am impressed.
FAUBE E-cup HATO-SP (prototype) 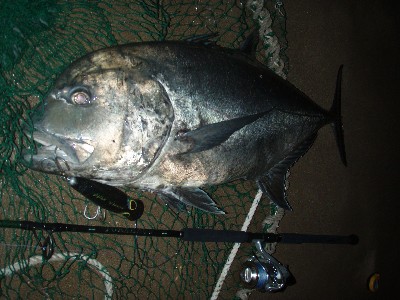 I move to the tip of the pier and land a 127cm GT.
Unfortunately, after releasing, this fish surfaced again.
So I hooked it and have it to the islanders to eat. I was told that it was 25kg after gutting it.
FAUBE E-cup HATO-SP (prototype) 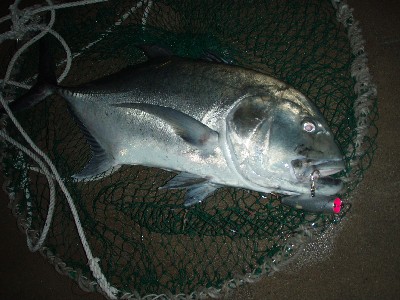 It was like the first day again.
I start casting the Panic Swimmy.
It wasn’t the first cast this time, but I hooked up around the 3rd cast. An ok size, 130cm GT.
As expected, it is very productive.
Caught on the improved version “Panic Swimmy” (prototype).

Heavy rains and thunder came so it was very dangerous. I went home.

The conditions of the following couple of days were very bad with heavy rains continuing.
It is the murky water color that affects the most.

We found sun shine in the morning of Saturday.
I went to the rocks hoping to do some educating to the Blue-fin trevallys with my Sharapoa.
The winds were south westerly so the sea was rough.
Getting soaked by the waves a couple of times,
I spot a Black GT eager to attack my lure from the shadows of the rocks,
but fortunately or unfortunately, it did not hook up.
If I had hooked up, no doubt I would have lost it to the rocks.

As I had changed my digital camera to a water resistant one, there were no problems in getting wet.
However, I totally forgot about my cell phone which was also in my pocket, which doesn’t happen to be water resistant….
With out my cell phone, I cannot do business so I decided this would be my last day.
The 30,000 yen for the phone is quite steep…

I went out on the boat in the afternoon to catch dinner. 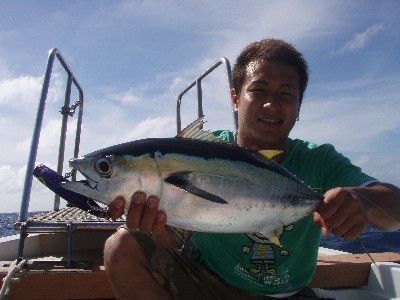 It was the first time lure fishing for the grand nephew who had been visiting the motel.
Picture of the yellow-fin tuna he caught on the Sharapoa. 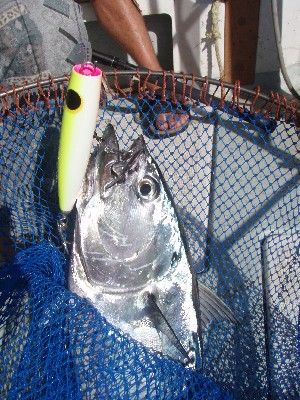 I also caught a spotted mackerel with the Sharapoa.
Dinner was Sashimi and BBQ! 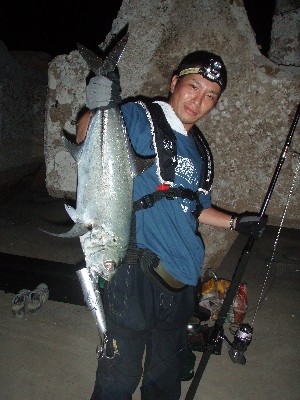 Other:
On the second day, my automatic floating vest suddenly exploded. It is one of its advantages as well as a disadvantage…
Accidents do happen, so its probably best to have a spare canister.
My face seems pressurized as well. Self portrait.

Test lures for this trip.

FAUBE E-Cup HATO SP (prototype)
The test is mostly complete during this trip. I would like to release it next year.

Improved version Panic Swimmy (prototype)
I realized its potential this year. Next year, I would like to reconsider its shape and weight.