I got a call from Mr. Matsuoka a day before departure.
"We are going to Tanegashima tomorrow and have one opening. Do you want to go?"
There was a simple answer for this, "OK".
I quickly prepared my tackle in the afternoon, and was in Kagoshima by 5:30 the next morning. 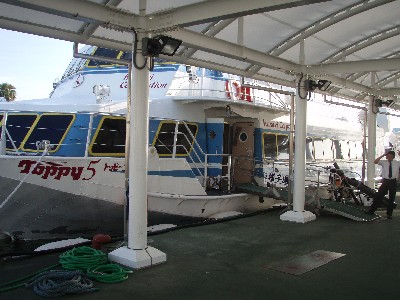 Tanegashima is only 1 hour and a half from Kagoshima by speed boat.
It is very convenient for people in Kyushu.
There are two boats, "Toppi" and the "Rocket". Due to connections we used "Toppi" this time. 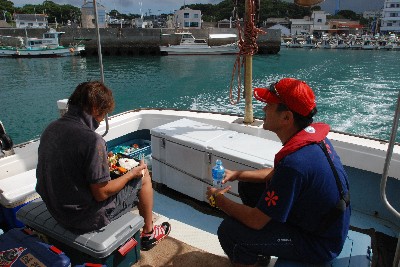 If one catches the first boat out, we will be in the guest house by 10:00 and prepare our tackle and on the boat by 12:00.
The members for this trip consisted of Mr. Matsuoka, Mr. Sugita, Mr. Ishita, and my self (Yoshio Maruyama). 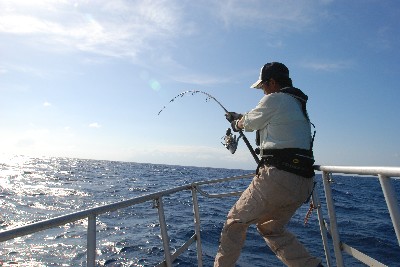 We arrived down south and waited for the tides to change.
After about an hour, a nice current came in and Mr. Matsuoka got a hook up. 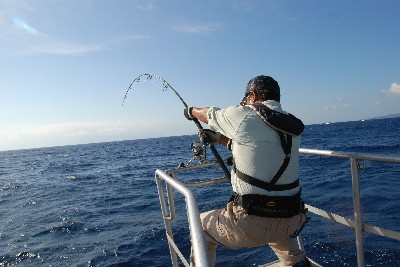 It looked like a nice fish, and Mr. Matsuoka is toughing it out by using his knees. 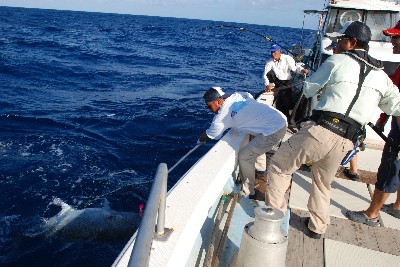 It finally surfaced but too big to fit into the net. 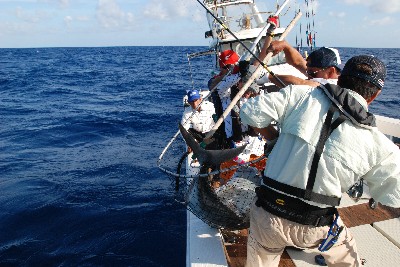 We hooked a tailer around its tail and the head in the net. The 4 of us lifted it up on the boat. 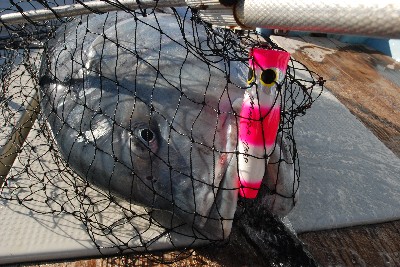 The G-Cup (low-light pink) was hooked up nicely. 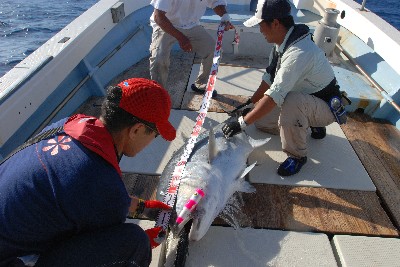 With the help of others, we measure the fish.
As its too big, it cannot be lifted by one person. 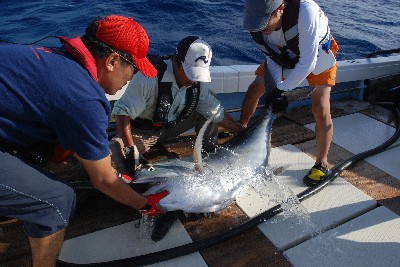 We decided to take pictures on the ground as we would not want to damage the fish by dropping it. 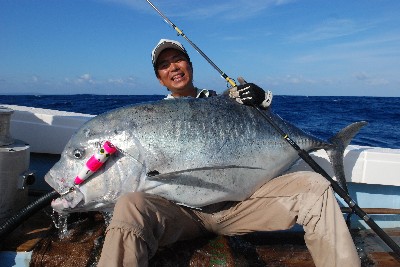 Mr. Matsuoka and his 160cm Over GT.
Unfortunately the scales were broken so we could not weigh the fish,
but there are no doubts that it would have tipped the scales.
Record fish for Mr. Matsuoka. Congratulations.
Caught on G-Cup (10). 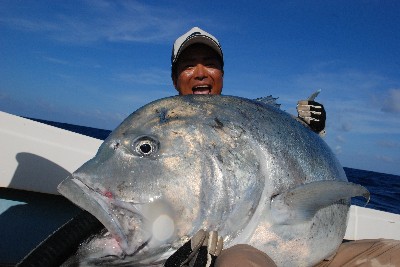 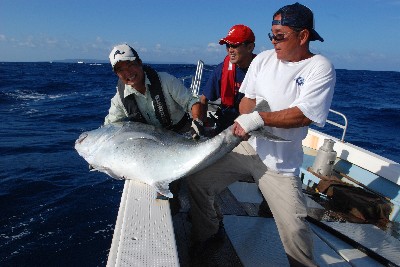 With the help of the captain, we released the fish successfully. 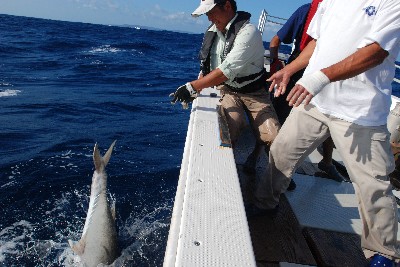 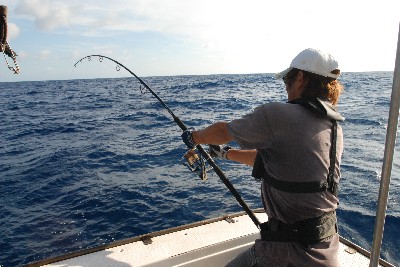 There was a miss-bite in the bow of the boat, so I casted the "Pink rotor"
near the are where I thought the fish would still be looking for the lure. 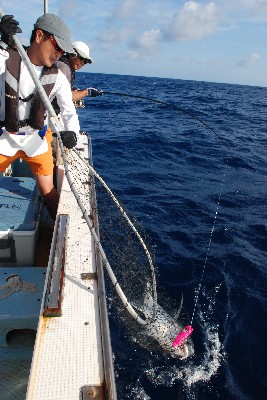 It was way too small compared to the previous fish. 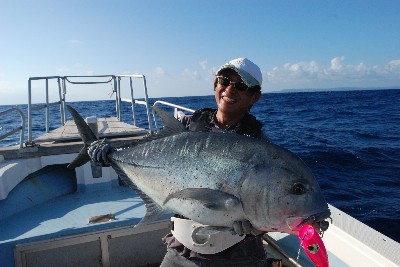 But I was glad I hooked up with the "Pink rotor".
Caught on "Shakure DV" prototype. 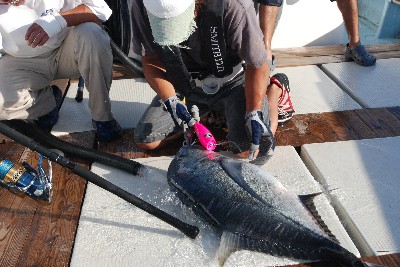 We released the fish after checking for hook up position. 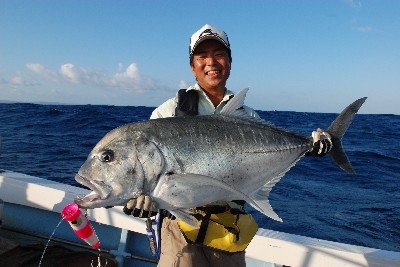 Mr. Matsuoka hooked up a same size after wards.
Caught on "G-Cup (10).


After we moved areas slightly, a nice size attacked my lure when I was casting from the stern.
As I set the hook, my reel exploded and I had to wind with my hands.
I was able to bring the fish in but as it got close, I busted my line near the boat. 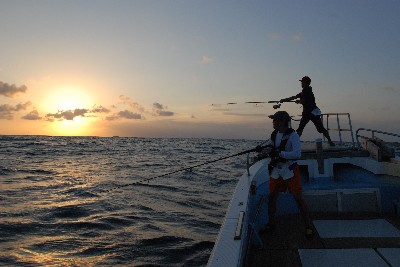 It was over for me following this bust off, but the others were casting till dawn and didn't get any bites anyway. 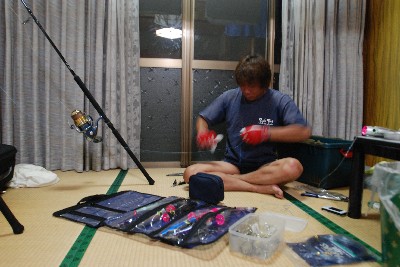 We go back to the guest house and prepare our line systems for the following day. 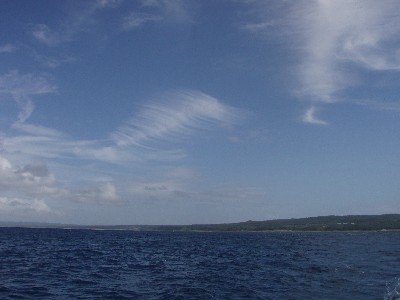 In the blue sky the following day, maybe due to my line break from the previous day,
there was a cloud which resembled a fish bone.....
I was a cheer leader this day..... 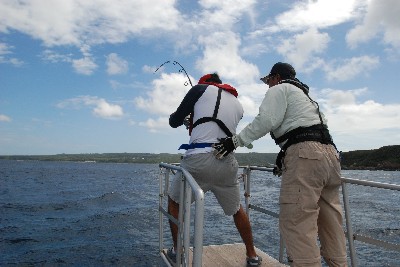 A GT attacked Mr. Ishita's E-cup where there was a hook out yesterday. 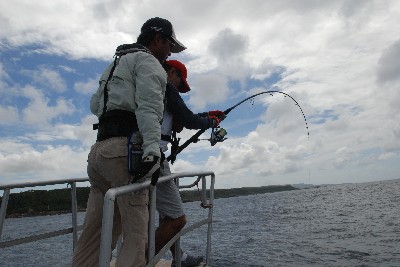 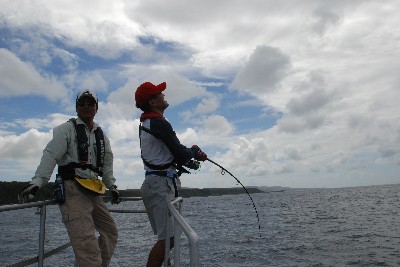 Mr. Ishita lifts the fish with all his might. 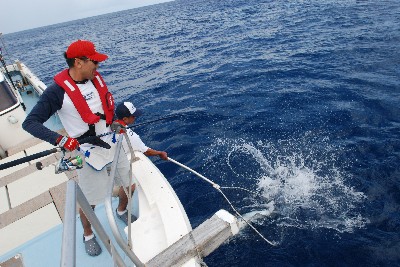 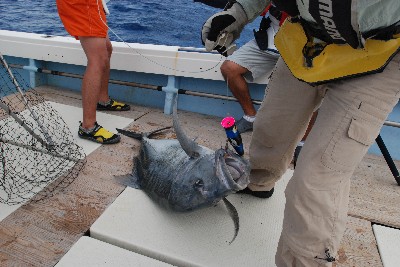 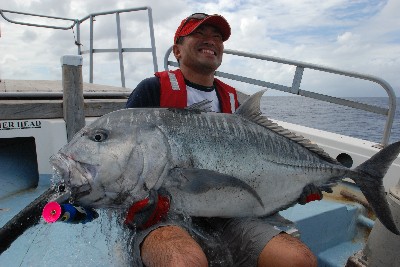 Another angle. The meaning of the fish probably out weighs the actual weight of the fish.
Congratulations!!
Caught on the E-Cup. 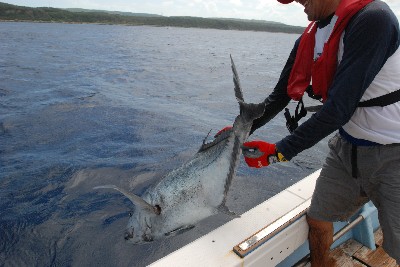 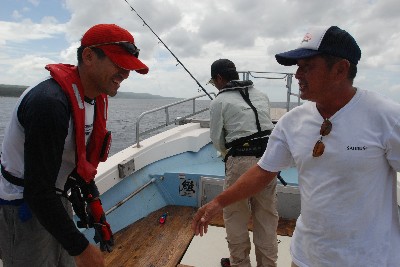 Mr. Ishita and the captain congratulates each other.
We were hoping that all members would be able to catch a GT, but Mr. Sugita's fish had to wait for next time

It was a one night stay and fished for half a day on the first day and half a day for the second,
but overall it seemed to be a successful trip.
We were reminded of Tanegashima's potential yet again.
It seems like I'm not going to be able to stay away from this island for long.